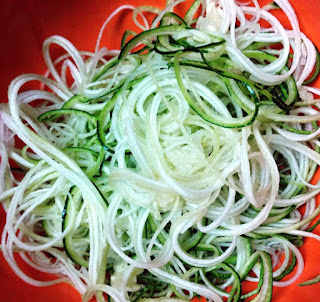 I will have 2 posts today!  This first one is foods I have been eating lately.  I've really been on the Zucchini Noodles hardcore the last few weeks and I don't see an end in sight!  I've had the Spirooli for at least 2 years now and I like it BUT since getting my newest appliance I can now say I LOVE LOVE LOVE my Joyce Chen Spiral Slicer even more!  I used the Joyce Chen when I did these noodles shown!  I think I like it better because they make a thinner and more consistent noodle with less effort and it's even easier to clean!

I've been messing around with several raw sauces and will be posting them over at The Raw Food World NEWS Recipe Section in the near future! 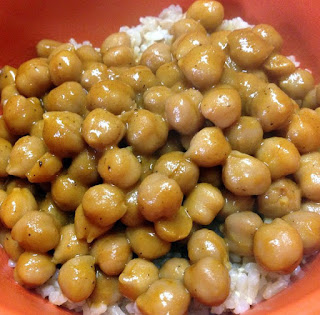 I have had several days over the past few weeks were I have had about 5 minutes to make something if I was going to eat anything at all other than fruit!  I've even been a lacking in the greens department!  Oye!

So I remember buying some of the Wegman's Brand Chickpeas that were already flavored.  The flavor was Marsala and they were pretty good!  I have them pictured here over brown rice.  It's a very light brown rice but it's still brown rice.

I'm still in the process of trying to pack my foods for the day in my car.  My mom had an extra cooler bag which will work nicely until I find a larger one at a better price.  I saw a YouTube video that John Kohler did a while back with a Coleman Cooler that plugged into your car and was like a refrigerator which was awesome but I haven't seen one locally yet!  Video is posted at this end of this post so check it out! 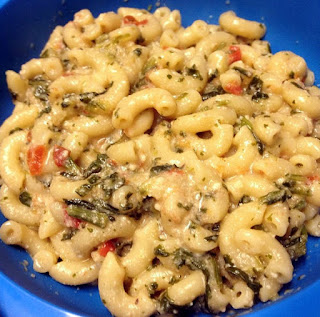 As for this elbow mac dish it didn't turn out the best but it was still edible.  I really wanted it to be thicker and creamier.

I had a bit of a surprise over the weekend that I will be sharing with you later today!  So be sure to stop back!

Now take a look at this video that is from OKRAW's YouTube Channel.  If you aren't familiar with the YouTuber - that is John Kohler!