Our First Fiat Club Meet Up! 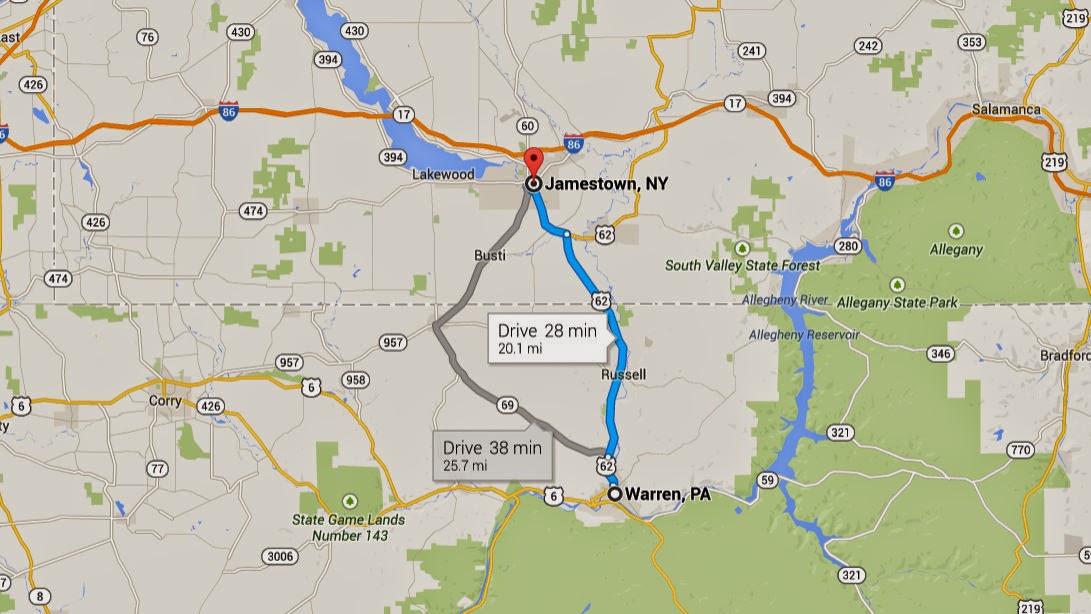 This past weekend Dale and I participated in our very first meet up with the Western New York Southern Ontario Fiat Club.

I, personally, have been waiting a month or two for this!  It did NOT disappoint!  It was a FUN time!  We did a LOT of driving and met some really great people!

Our starting point was in Warren, PA, and we met up with a couple from Jamestown, NY, over at the Park N Ride there.

After we met Tom and his wife Kathy in Jamestown - the 4 of us - in our 2 Abarth's - drove to Ellicottville, NY, for the first stop on the run! 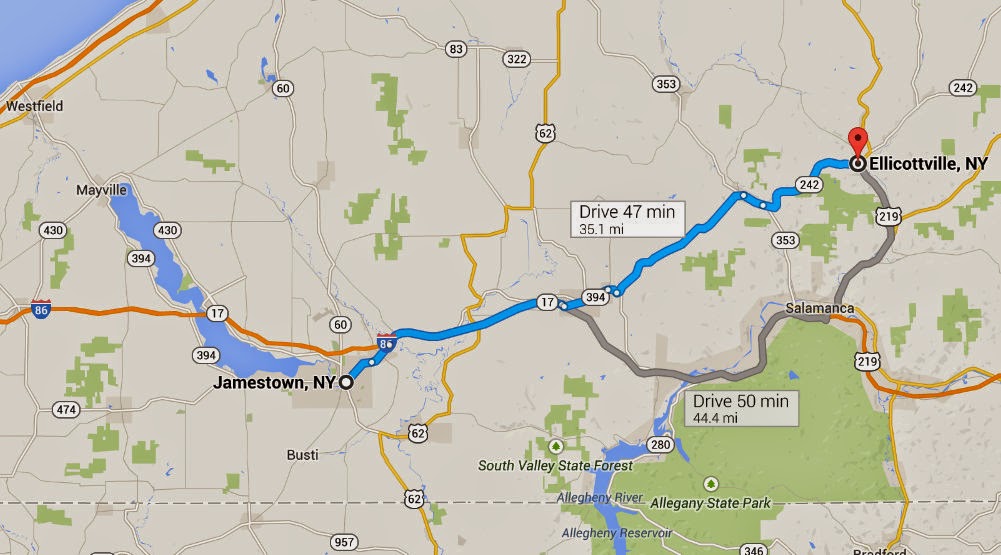 When we got to Ellicottville we grabbed some tea and coffee at The Coffee Culture and chatted a bit.  This was the first time we have met ANY of these people.  Everyone was great tho!  Shortly after we started sipping and chatting another man drove in with his Ferrari.  Not too long after that the brunt of the Buffalo Area crew drove in - with their various Italian Cars!  2 of them stopped to get gas before the entered the parking lot of the coffee place.

Of course I snapped some photos on my iPhone.  After everyone official 'met' each other we decided to take off!   In the photo above I think I was able to get everyone accept maybe 1 car.  In this photo I wanted to get the Abarth's and Fiat's together.  The red one is Tom & Kathy's and ours is to the right of theirs...the grey one! 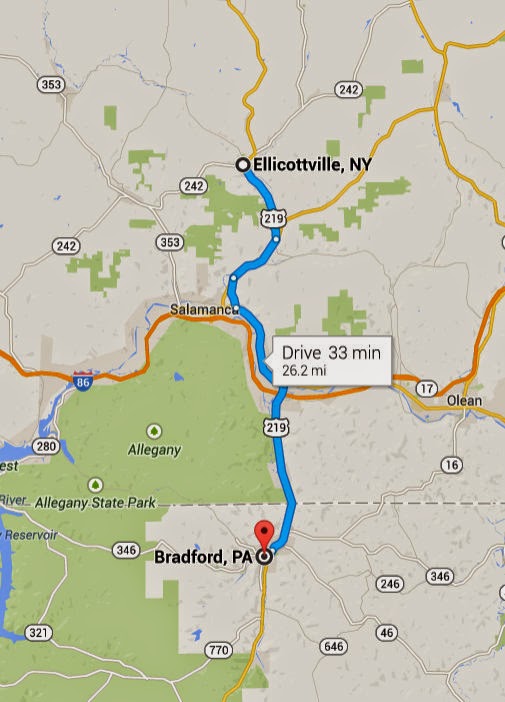 From Ellicottville, NY, we all drove to Bradford, PA.  We drove around downtown and over to the Zippo Museum.  This was the first time I had ever been at the Zippo Museum eventho it's not far from our home.  Funny thing, too, is we drove the other way to go back but we want to get to know these guys and thought it would be fun!  I think I am going to post another blog entry about the factory in the near future because this post is already going to be VERY long.  There is a TON of history when it comes to Zippo Lighters but more on that later.

We spent some time at the museum and were able to talk to the chapter's leader Darryl and his brother Owen quite a bit.

On the drive from Ellicottville to Bradford Owen was leading the pack then Tom and his wife and then Dale and I.  The Abarth's were in front.  When we left the Museum the Ferrari was in front of us. 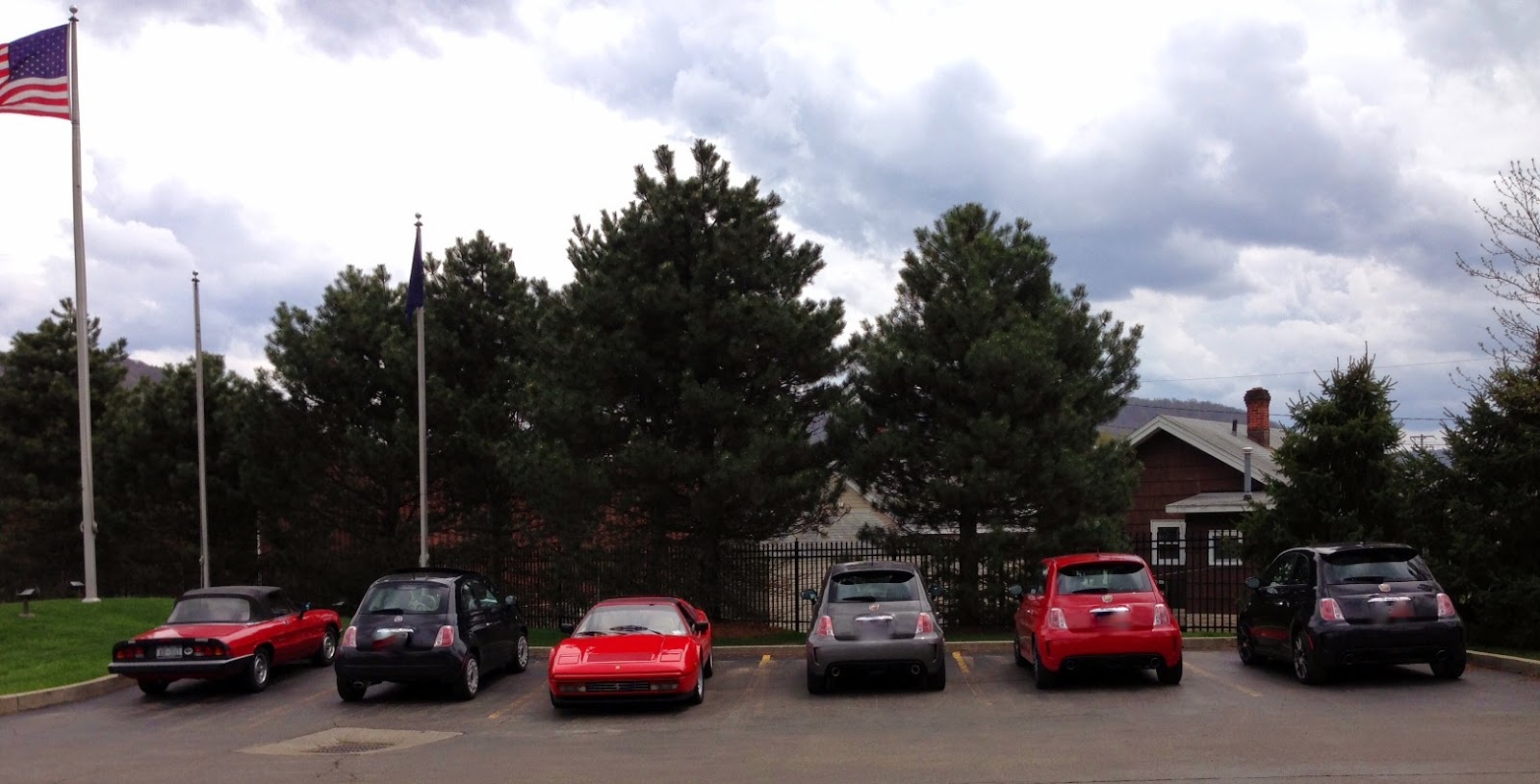 I was able to get a photo of most of the cars in the parking lot of the museum except for Darryl's Spider that was in the other section.  There was also an Alfa that came along on the drive.

The weather ended up being pretty nice but it didn't start out that way!  When we left Warren we were attacked by bug swarms!  I think it's going to be a problem near the Conewango Creek this year. 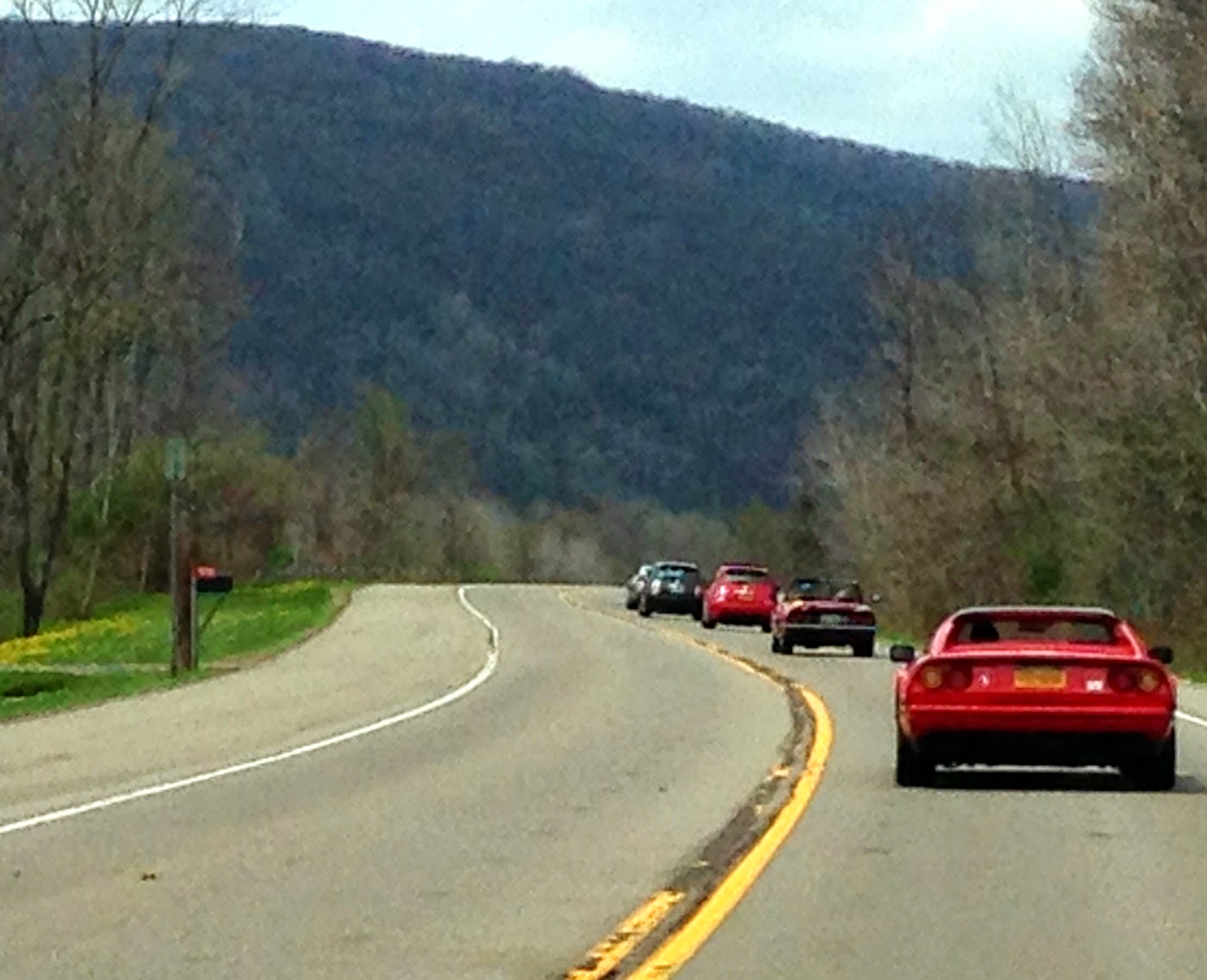 As you can see our SPRING is a little behind because of the wicked winter we had.  Not much has bloomed yet.  Some area Landscapers have said it's about 2 to 3 weeks behind schedule.  Many people in our area have lost a LOT of their trees, shrubs, and other plant life that comes up every year because it was colder than usual.

So...that's why the scenic tour isn't as scenic in these photos, I guess.  It was nice, tho, at least it wasn't snowing!  Fingers crossed there will not be any more snow but then again nothing ever shocks me anymore! 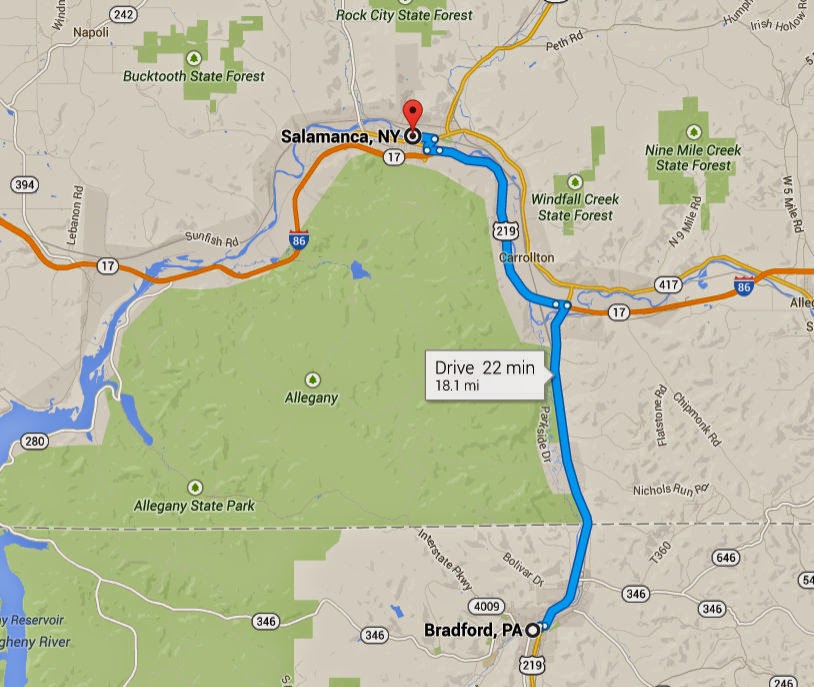 From Bradford we headed back to the state of New York to Salamanca.  Much of Salamanca, NY, is on the Seneca Allegany Indian Reservation.  It's a lovely part of the state.

Our destination while in Salamanca was a restaurant on top of a hill.  It used to be called The Red Garter but it was recently bought and remodeled.  It's called Bear Mountain now.  They still have the restaurant and are adding a RV Park.

Dale and I got HUGE salads (because we were going to have dinner in a few hours) and they were really fresh and tasty and reasonably priced! 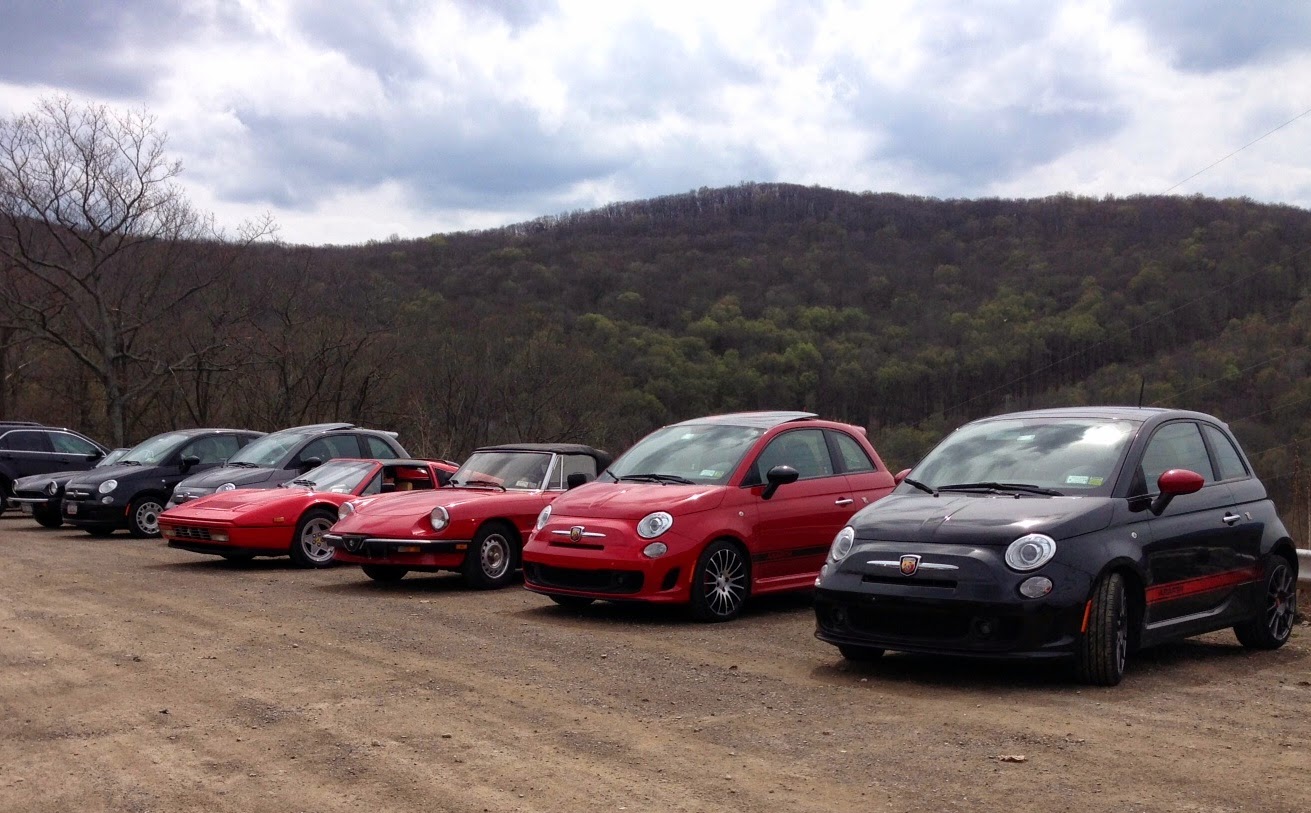 Here's a photo I took of the cars lined up in the parking lot on top of the hill.  You can see SOME of the trees bloom in the back.  We have mountains of trees around our area since we are near the Allegheny National Forest among other things!

The restaurant was HUGE and had 2 floors.  They had a bar downstairs - capabilities of one upstairs as well as outside - plus decks on both levels.  The outside seating area was painted in Orange and Black - Harley Davidson Colors. 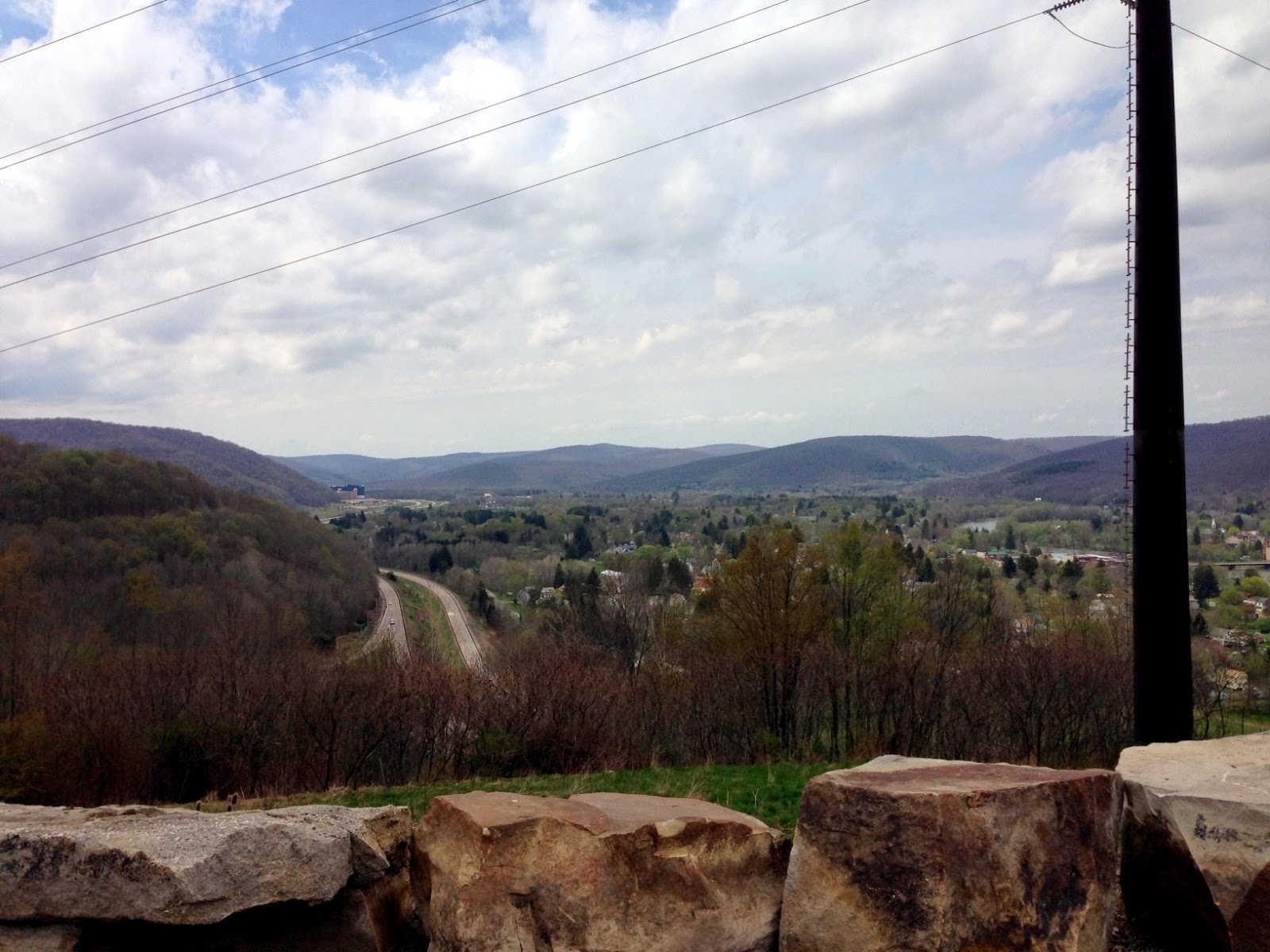 Here's a look at the view from the parking lot.  It's MUCH higher up than it looks in this photo.

We had a GREAT time!  There are more photos on my Facebook if you are interested.  The WNY SO Fiat Club will be participating in the Euro Car Day in Williamsville, NY, on June 8th and I think we are going to go!  I think on June 21st they are headed up to the Finger Lakes for a stop a a trio of Wineries.  I really hope we can attend that as well.  In between those two weekends we have a LARGE Wildtree event that I will tell you about in the near future, too! 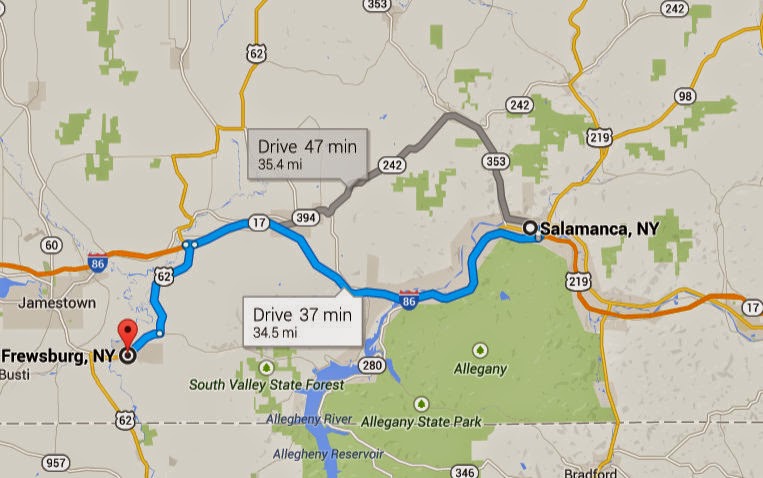 After we parted ways from the group after a late lunch or early dinner we took a drive on our own.  Not nearly as speedy or lengthy.  But we ended up in Onoville, NY, which is near Frewsburg, NY, and went to The Horseshoe Inn for dinner.  It was nice.  I haven't been there in a LONG time and they made me a wonderfully LARGE Veggie Wrap!

Afterwards we headed back home.  It was a FULL day but it was super FUN!  Can't wait for the next Meet Up with the Fiat Peeps!  I think we ended up putting 400 miles on the Abarth but we didn't even empty the tank!  NICE!
Posted by Unknown at 7:27 AM