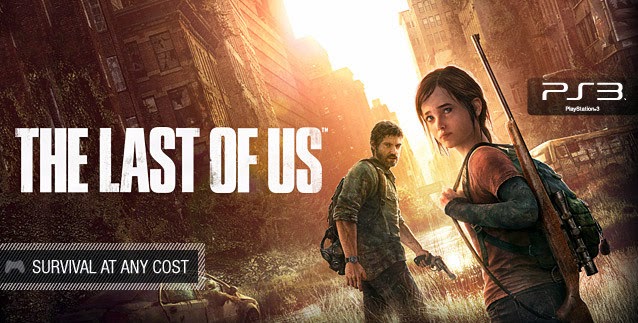 This past weekend hubby and I decided to purchase a Sony Play Station 3 Bundle which INCLUDED "The Last Of Us" Game.  It's been a few years since we have gotten into gaming.  We don't really watch all that much TV - and what we do watch is via Hulu Plus and Netflix via our Apple TV.  Currently we are all caught up on the few TV shows we do watch and we thought that we would get into a game that we could try and figure out together in the evenings to upwind after work.  Since hubby gets up REALLY EARLY to start his air shift he usually goes to bed around 7:30.  So after dinner we try and fill our time with a together activity such as catching up on a show or NOW in this case playing our game.  An inside joke that we have shared for awhile now is the name of this game.  When we started seeing the promos for it on Hulu Plus it must have been the way it was printed and the font they were using I swore it said "The Last Doofus" - teehee - which our dog Riley has been known to go by at times - when he pulls a 'bone head move'.  But all-in-all the game storyline and graphics drew us in.  We've only played it a few hours this past weekend but it sure hasn't disappointed.  I can see how it would be EASILY Addicting.  I will will say, tho, that this is certainly an ADULT game.  It's basically like watching an R Rated Movie...with the language and violence.  But we are in our 30s and 40s - and do NOT have children - so it's 'fine' for us. 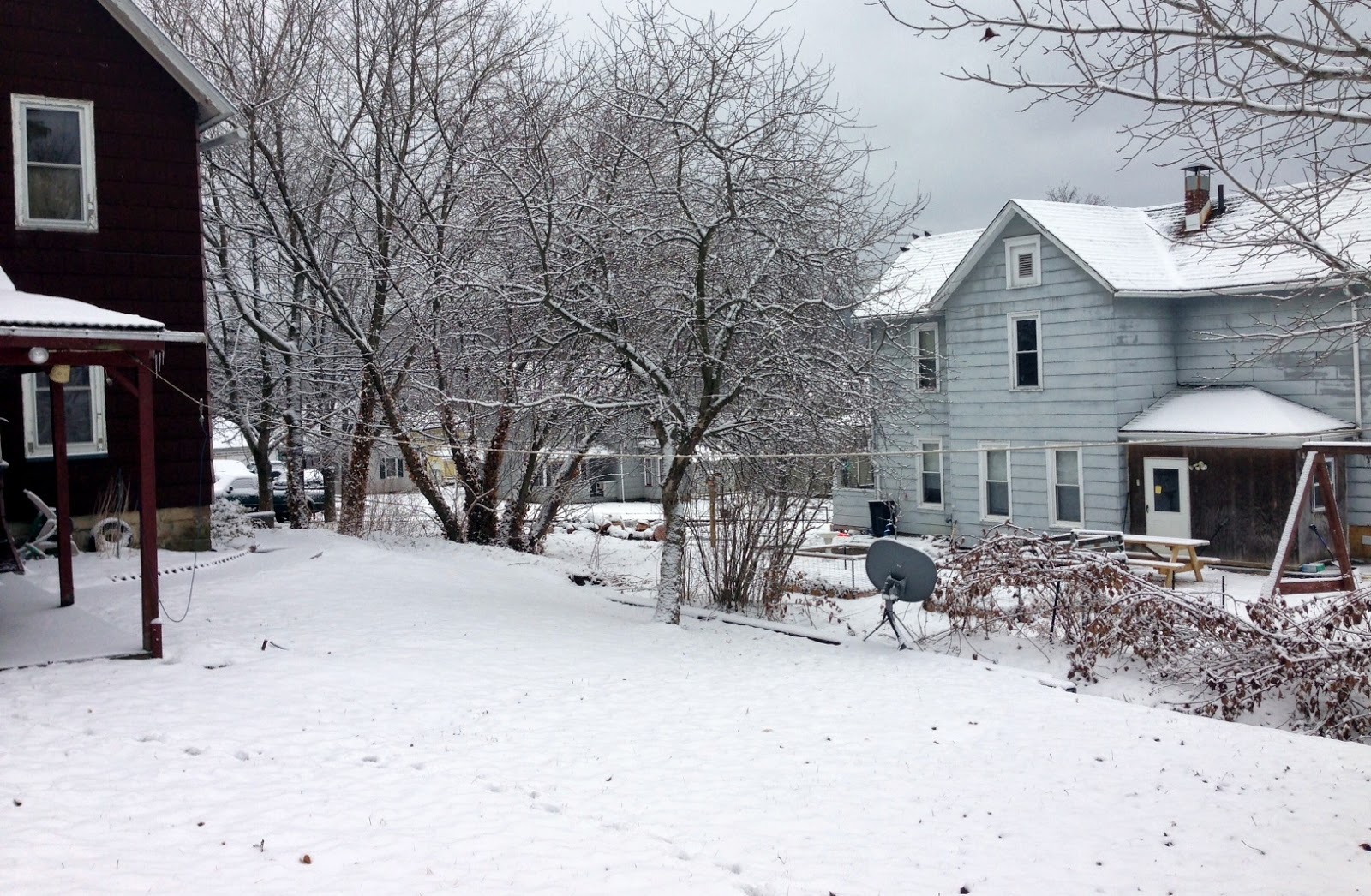 Another surprise this past weekend was the weather.  Well, NOT REALLY considering it's been a really crazy weather year already but he ended up getting about 5 inches of snow within an hour or two.

Another ODD bit of info to this story is that yesterday it ended up melting quickly by mid afternoon and today is supposed to hit around 60 degrees! 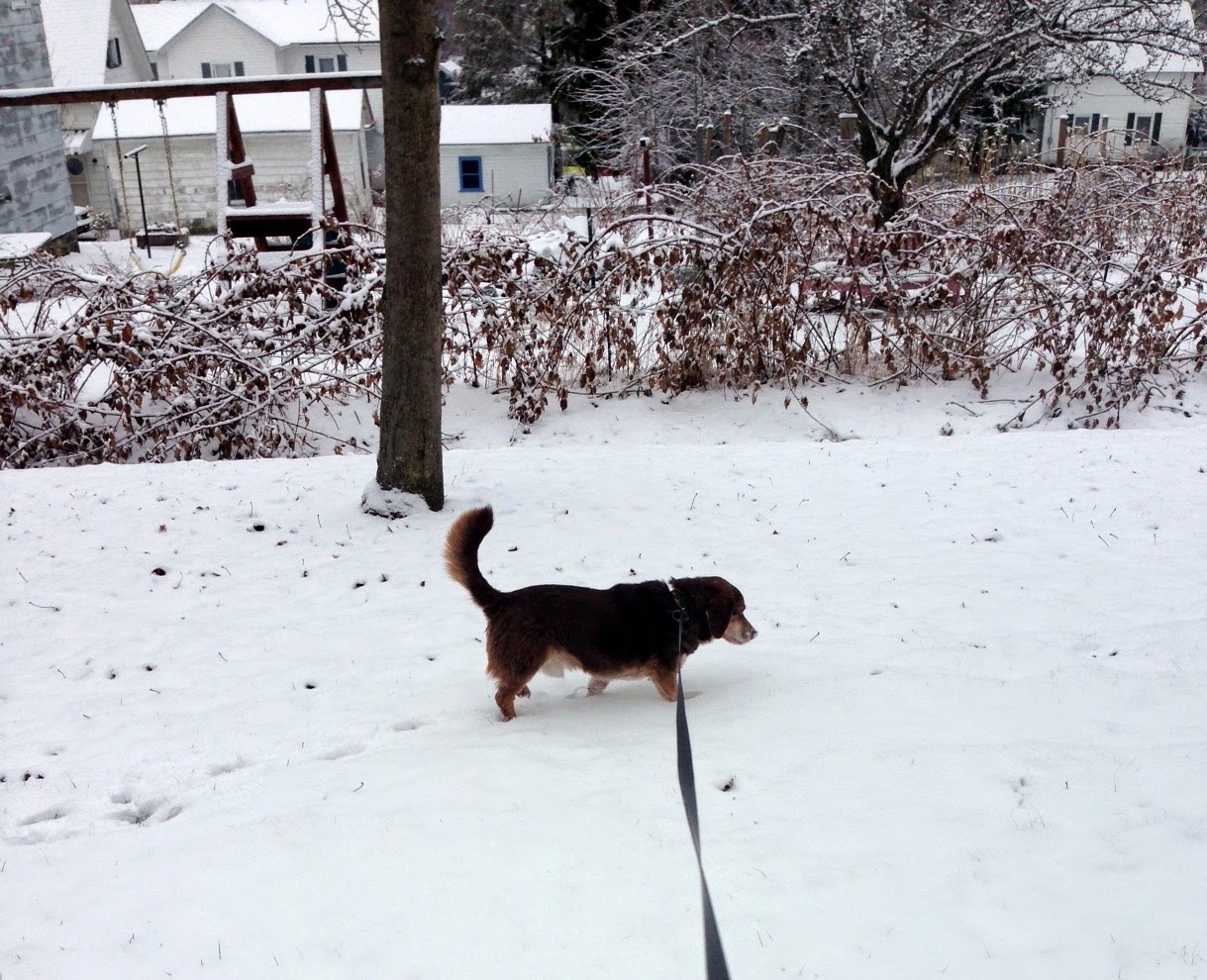 I thought I would take some photos for you tho - not only to show you the snow but to show you Riley ENJOYING the snow!

There were many times this past winter not even Riley liked it...but he sometimes like to roam and EAT the snow even!  What a weirdo!

You can see some of my neighbor's yard in these photos, too, they have a HUGE garden but they aren't the most approachable people.  Some of their brush is even growing on to our property and the other neighbor on the other side's fence is starting to fall.  Yeah...our neighbors are a bit 'odd'.  Oh Well!  Bring on SUMMER!
Posted by Unknown at 1:24 PM