For The Love of Music & Furkids

Furkids can be so funny!  Paco's been extremely cute as of late!  Here are several photos over the last week or so of some of Paco as well as my parents 'kids'.

These first couple are Paco from last night!  He's been LOVING the pillows - ever since he ate one - he's been much better about them - and sleeping on them at night...usually above my head...but this was before the rest of 'us' got tired and he buried his face in one of them!  He was TOTALLY in deep - DEEP slumber!  He didn't even move when I took the photo!

He did wake up for a little bit - but then went back to sleep soon after that.  Here's a photo of him in between two pillows on the sofa.  What a goof, eh!?

At least he's back to being GOOD - he was a little hell-raiser for a few weeks!  He must have just been excited about Christmas, right!?  YEAH...that MUST be it! 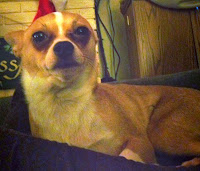 Like I said...he's been doing this for a week or two and this was one of the photo's I captured in the middle of the night!  I woke up and there he was - just like this - staring at me - it was so funny!

It made me laugh - out loud - with no one around! 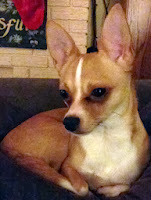 It's been kind of rough since Suzie's surgery.  Riley and Suzie have not wanted to go back to the bedroom to sleep - but - at the same time - they don't want me up there unless they are with me - but they won't let me sleep - so I have been sleeping down stairs for the most part since DH has to get up around 3am for work.

It just works out better that way - I guess.  I think our next purchase for the house, tho, might have to be a pull-out bed/couch or a futon, tho!  It will make things much more comfy!

Paco's been much more happy because he stays out with the other 2 dogs and me at night when I'm downstairs.

The cats have been doing well, too!  Gabby's still LOVING her chair and Charlie has ALWAYS loved his!  Most of the 'kids' in our house hold are getting older - Paco's the youngest - but then we jump to 9, 10, and TWO 14 year olds!

A few days before Christmas I visited my parents house and they had some surprises for me including some "healthy snacks" that my father got from a salesman.  In addition he received a Holiday "Tripi" Truck with snacks that he divvied.  Afterwards - we put the cardboard "truck" on the floor and their beautiful Orange Fluffy Cat - JETER - yes, named after Derek Jeter - of the New York Yankees - decided to jump inside and play "Truck Driver".  It was so cute!

Then some one just curious - or jealous - or both and went over to get nosy!  This is Lexi - the puppy that my parents recently adopted!  She's amazing!

Her and Jeter get along well.  Her and the other cat Bernie...well, they tolerate each other.  No major problems, really, tho! 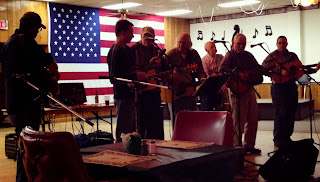 Some of you may know that my husband is in a local/regional band.  It's a Bluegrass Band and since he had a few days off last week he was able to attend an open jam with other members of the band in a nearby club.  It was FUN.  They were able to see some old friends they haven't seen in a while. 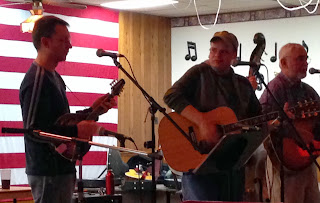 Here are a couple of photos from that night!  A few of the members of the band as well as some of the other guys who came to the jam session that night!

Here's another pic of Tom - on the left - the band's mandolin player and my husband in the middle.  The other guy on the right was another jam session member I didn't know very well...but he seemed nice.  Tom's wife Nicole and I were at a nearby table 'catching-up'.
Posted by Unknown at 8:50 AM