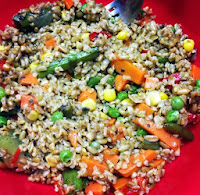 I bought some Freekeh a while back but didn't use it until Sunday while making a dish for my lunches this week.  This is the first time I have used it and I must say I enjoyed it and will certainly be using it again!  The brand I bough was Freekeh Foods.  The first flavor of theirs I tried to work with in this dish was their Rosemary Sage.

If you aren't familiar with Freekeh it gets it's name from the process which means "to rub" in Arabic. Freekeh was created by accident nearly 2,000 years ago when a Middle Eastern village was attacked and their crop of young green wheat was set ablaze. Most folks would sulk over their misfortune, but the crafty villagers rubbed off the chaff, cooked it up.  Of course I LOVE reading about the origins of foods so I was happy to hear the history of this as well!  Freekeh is similar to Barley or brown/grain rices.  It has a chewier texture which I like a lot!

Freekeh has several nutritional attributes that are superior to those of comparable cereal foods. Some people consider it a superfood. It compares well to other healthy grains such as quinoa and farro. Freekeh has at least four times as much fiber as some other comparable grains, consisting mostly of insoluble fiber. It also has a low glycemic index so is suitable for managing diabetes.

In the dish you see above I used the following:

I cooked the Freekeh for 25 minutes.

I think it turned out wonderfully!  I didn't even add any additional flavors to this!  The Rosemary Sage was just right.  If you wanted to you could probably add some soy sauce or some Aminos for you wanted it a bit salter.

I can't help by think of the song by Missy Elliott "Get Your Freak On".  I've always liked her!  Her videos are very creative and she's more of a Tomboy than a Girlie-Girl.    Most of her songs aren't for younger audiences altho I really liked the cover of Car Wash she participated in for "Shark Tale" Soundtrack that was probably one of the more family friendly sounding songs she's done.