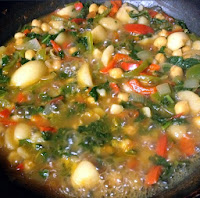 WOWZA!  What a week!  And it's ONLY Tuesday!  The main reason that I have been 'few and far between' on my posts for over a week has mostly been because I have been running non-stop!  Hubby was in the ER - twice in 5 days - as well as the doctors office - twice in those same 5 days.  He has 2 Kidney Stones, Inflammatory Bowel Disease, and Colitis...he might also have a Urinary Tract Infection.  He's been on the BRAT Diet for the past week and he's NOT loving it...the meat eater he is!  BRAT stands for Banana, Rice, Apple Sauce, and Toast.  So far he hasn't done the Apple Sauce but has done the other items on that list.  He's feeling a LITTLE better but meets with another doctor today and Thursday has an appointment with a Urologist for the Kidney Stones. 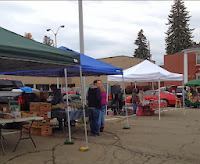 In other news...and there is LOTS of other news...I have some foods to share with you...some great attempts and what I consider a FAIL with Apple in a Soup.  You don't know unless you try, right?  Anyhow...in the first photo above...you will see a Gentle Veggie Stew I made last week.  I usually LOVE intense flavors but this one was VERY Gentle.  In this Veggie Stew...I used the following...6 Small Potatoes, 4 Small Tomatoes, 1 C Kale, 1 C Chickpeas, 1 Small Onion, 1 Red Pepper, 1 Green Pepper, 1 tea Garlic Powder, 3 to 5 squirts of Braggs Liquid Aminos, 2 C of Water or more if needed.

This past weekend was the last weekend of the season for our local Farmers Market.  I wasn't able to go this weekend but I went the weekend before.  I'm so sad to see this season end! 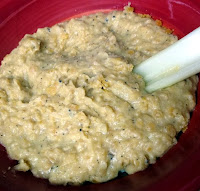 One of my FAVORITE Dip/Spread Attempts I have done in a while was this Lentil "Cream Cheese" Spread that I made with 1 C Red Lentils (cook those so it will be more) and 2 hefty Tablespoons of Daiya Cream Cheese so that it melts along with a tiny splash of Garlic Dipping Grapeseed Oil.  (Or you can use Garlic, Sea Salt, your choice of Oil).

This was AMAZING!  I did more of it last night but mad it thinner and might even thin it out even more and use it for a sauce on pasta or rice soon! 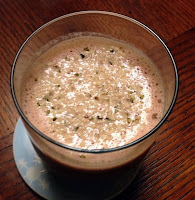 Another lovely food attempt last week was a smoothie I made using Cashew Milk, Sun Warrior Chocolate Protein Powder, and about 8 Frozen Strawberries.  I topped it with Hemp Hearts/Hemp Seeds.  It was tasty. 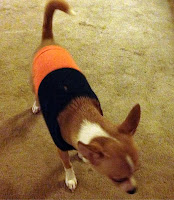 I have been tinkering with a LOT of smoothies lately and will report back with my creations!

Yes...it's been cooling WAY DOWN here and I am NOT LOVING it.  The warmer the better for me.  Don't get me wrong...I LOVE the seasonal veggies and colors of the Foliage but I would take the warmer weather that is for sure...and lets not even discuss SNOW...eeeek!  Anyhow...the Coats/Jackets are out and being worn.  Paco's sweaters are now back in use, too!  This is one of his favorites!  I think I will end this post for now.  I just remembered a bunch of other pictures I have to crop and post about.  In addition to everything else from last week we had some phone issues and I ended up getting Hubby's iPhone 5 and he upgraded to an iPhone 5 S so I will mention that in my next blog post as well!
Posted by Unknown at 8:06 AM