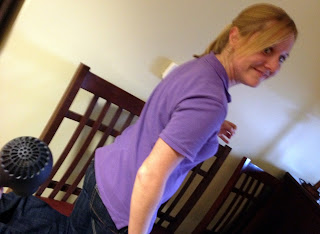 I think this will be the last of my posts for today.  This is 3 of 3 - so please continue to scroll down!

Here's another photo of my sister from over the weekend.  When you read my other posts it will all make sense!  It's a photo of me trying to dry her pants with a hair dryer! LOL

Yeah...so after we were caught in the heavy rain we decided to pay my parents a visit at the resort they were staying at for the weekend.  It was part of a promotion where my Dad works.  He and my mother helped work it and the accommodations were amazing!  They were at Holiday Valley in Elicotville, NY.  Holiday Valley is known as a Skiing Destination in the winter and a get-away in the summer months.  They are also quite busy during the fall.  It's been YEARS since I have been there for any reason.  Since we left our event 2 hours early we decided to swing by.  We saw some 'friends of the family' we haven't really seen in a while - who also worked with my father.  Mom and Dad were on their way to a dinner but Megan and I decided to go to Dinner in one of their restaurants within the Resort.

The name of the restaurant was John Harvard's Brew House and it was a really nice place!  There were a few vegetarian options on the menu and they could easily be veganized by omitting an ingredient or two.  The waitress was really nice and willing to help with this!

My sister - who is NOT a vegetarian - had a flatbread pizza with a Basil Pesto Sauce, Mushrooms, Tomatoes, and Onions.  So technically her meal was vegetarian but not vegan.  She really doesn't eat a lot of meat but still isn't veg.  There are several foods she stays away from because of stomach related issues such as fried foods, red sauces, carbonated beverages, etc.  She really liked her flatbread.  I'm not going to lie - it smelled amazing.  So much so - my next kitchen adventure might have to be a Vegan Basil Pesto Sauce.

We ended up splitting an appetizer.  We got the Mediterranean Platter (minus the Feta) which consisted of: Hummus, Tabbouleh, Roasted Peppers, Kalamata Olives, Tomatoes, Artichokes, and Pita Bread.  It was the first time my sister had Tabbouleh and she really liked it.  I told her next time I make it I would save her some!

For my Dinner I got the Mediterranean Wrap (Minus the Feta) which was Hummus, Olives, Baby Lettuces, and Diced Tomatoes.  It was HUGE.  I took half of it home.  It was tasty, tho!

After we were done with dinner we took a stroll around the grounds a little bit.  We came across this Faux Bon Fire out behind the one building!  I thought it was beautiful!  Everything about the place was nice, tho!

This was a photo of the building my parents and their crew stayed in...

My sister and I chatted the whole way home about trying to go back at some point and stay longer and have a girls weekend but I am sure it's very expensive!

Even if you don't STAY there you can go to the restaurants and different things around town which is more of what we are apt to do, I guess.

I also mentioned it to my husband and he was interested in taking a trip out for dinner some evening and/or weekend!