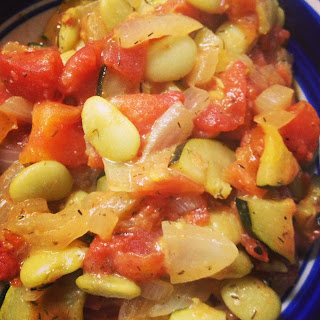 It's been a long week but a VERY busy week and it's the first of 3 long, busy weeks in a row!  This time of year is my BUSIEST of the whole year at work!  It's NUTS!  On top of that we have been going thru a lot of changes as well as equipment issues as we were hit by lightning over the weekend and had LOTS of issues with various pieces of equipment and so on and so forth.  Another reason I have been out of sorts is because I had to go back to the dentist today and that sucked!  I'm finally getting to the point where I feel semi-normal again.  Found out I have to go back in September for another filling, too, THAT BITES!  Pardon the pun, there.  In other news...I do have a few photos, fun, and food to share with you including this first pic.  It's Tangy Limas with Squash and Tomatoes!  I really love the lemony flavor of this paired with the dill and produce I used!  It contains: 1 C Lima Beans, 1 Onion, Grapeseed Oil and Water to consistency wanted, 1 Zuke, 1 tea thyme, 2 tea Wildtree Dill Blend, 2 C Diced Tomatoes, and I sprinkled Vegan Parmesan Cheese and used the juice of 1 lemon. 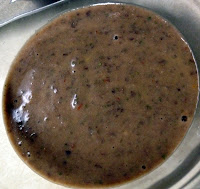 I also made an interesting Buffalo Black Bean Dip recently, too!  In this I used a bit of Coconut Oil and heated it with 1/4 C Chipotle Hot Sauce (I used the rest of my now discontinued Wildtree), 1 C Black Beans, 1/2 Red Onion, 2 Cloves Garlic, 1/4 C Cilantro, splash of Balsamic Vinegar.  This was a bit bite-E, and after sitting in the frig overnight it got more garlic-E-er and I really liked it!

Last week - Thursday thru Saturday - we took our Wildtree Display over to our local fairgrounds.  There were LOTS of different things going on including a BBQ Festival, Regions Archery Tournaments, Vendor Show, Music Festival, Silver Cup Horse Show, and Go-Kart Racing.  We didn't do as well as we hoped but the weather was CRAZY!  It was 93+ degrees for 2 solid days with over 85% humidity then Saturday evening it 'let loose' and poured HARD CORE!

Paco and Riley enjoyed the time home last night and they snuggled up to each other, too!  I had one on one leg and one on the other leg!

Tonight I hope to meet up with my cousins from TN/AL area.  Haven't seen them in a year and before that it was several years.
Posted by Unknown at 1:29 PM