This past weekend Hubby and I needed to get-out-of-dodge at least for a day...so we decided to take a trip over to 'our side of Ohio'.  We didn't want to get smack-dab in the middle of Cleveland so we stayed on the fringe of it with Lyndhurst, Woodmere, and Mentor on our minds.  We decided to drive to the farthest point and work our way back.  It was just under 3 hours there.  We went to a very LARGE music store in Lyndhurst called Sam Ash Music.  It's the first branch we have been to.  We usually frequent World of Music in Erie, PA, or various Guitar Centers but this shop blew all of them out of the water!  This is a FIRST...Hubby didn't buy anything but I did!  I found a fabric Ukelele Case with a shoulder strap for about $20!  In was in a nice little plaza section with various other stores and we walked by the store fronts but didn't go inside any of the other shops. 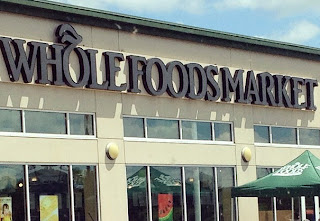 We then moved on to Woodmere.  I found out they had BOTH a Whole Foods Market as well as a Trader Joe's!  I was limited to one stop because there were other places we were interested in going so I decided to choose Whole Foods.  It's only the 2nd Whole Foods Market I have ever been to!  Usually when I speak about Whole Foods I am referring to Erie, PA's Whole Foods Co-Op which is owned by members and not by a chain like the market is.  Anyhow...the only other one I have been to is the one in Las Vegas.  I really liked the store but because we were only there for about a week and staying in a hotel I didn't purchase much, then.  I did notice that the Las Vegas store had a large Juice/Smoothie Bar that the Woodmere location didn't have but I have to say I really enjoyed the Woodmere location.  The staff was AMAZING, the store very clean, the selection was very nice, and I ended up buying about $45 worth of stuff.  Mostly things I couldn't find in my area/region as well as items that were lower in price than I am used to finding.  I also chose Whole Foods over Trader Joe's because they are supposed to be building a new Trader Joe's in Amherst, NY, during 4th Quarter, and that is half the time to get to once it's up!  I'm looking forward to it very much!  I have only been to one other Trader Joe's, as well, and that was the one in Pittsburgh about 2 years ago.  Saturday they were having a Vegan BBQ to raise money for a local Sanctuary and had I known I would have tried to participate but hubby had his heart set on The Winkin' Lizard and we sort of build the trip around that original thought in the first place. 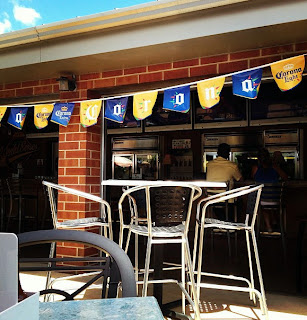 I think it's been about 5 years since we've been to the Winkin' Lizard last and I remember liking it.  So after Whole Foods Market we drove to Mentor where we ate at Winkin' Lizard there.  They have various locations as well.  I wanted to sit outside so we did.  I had a veggie wrap - without the dairy - and we shared one of their 'Drinks for 2'.  It was very nice.

We were going to try and look for a winery or two on our way back thru but we were driving on a different route and went back thru Erie and stopped to see my brother in law for a few minutes and then drove home.

It was a nice drive!  A nice day!  I'm so happy we stopped at the places we did and now Hubby has a new Music Store and perhaps we can swing by Whole Foods Market a couple a times a year now.  What did you do this weekend?  Anything special!?  Any plans for this week or upcoming weekend?
Posted by Unknown at 11:55 AM