I want to thank everyone for the comments and emails yesterday after I posted about Riley.  All of the positive vibes, prayers, and thoughts were much appreciated!  I'm happy to report that Riley is doing quite well!  He ended up having Oral Surgery.  When I took him in - they were unable to really 'see' what was going on under his tongue/on his teeth.  Riley is a Scared-E-Cat!  He won't let me do his nails, brush his teeth, or even BRUSH him without him throwing a fit!  So it was 'by chance' when he yawned the other night that I even SAW the 'grey spot' to begin with!  I'm glad I did, tho!  When I called the vet about it I told them I felt so bad that I had 'missed it' up until now.  They told me that they 'missed it, too' because he was in for a full physical about two months ago.  They said that it was in a really weird spot, too, and no one would have really seen it! 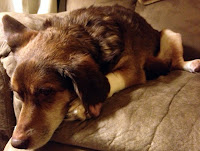 What was "it" you might ask?  Well....eeeeek!  You won't believe it!  I sure didn't!  It was a combo of hair and plaque!  Yes...HAIR got in between his teeth and layer that with plaque and it kept building up!  OMG!  I couldn't believe it and never have heard of that before!  They removed all of it along with the two teeth underneath!  I still feel awful but they did take care of it and he's doing well!  THANK GOD!!!!  Thank God it wasn't something worse or life threatening!  In the meantime, Suzie, didn't do very well at all with her brother 'missing' yesterday.  She was certainly in 'rare form'.  Now that everyone is home where they belong the "Blissful Household" is getting back into it's "Blissful Swing of Things".  Riley is re-cooping nicely and just about back to normal after yesterday's ordeal!  He's on Antibiotics and we do have pain pills if needed. 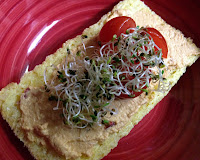 In other news - since the last few days have been so nuts I decided to 'skip' this week of world foods and get back on track next week BUT will still be posting about the foods I do consume, regardless!  Last night I did a quick Veggie Burger - of course it was my most FAVORITE Veggie Burger - the Artichoke and Cashew ones I have talked about several times before...they are from Five Star Foods! 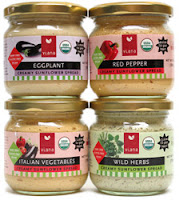 For a snack I had a few of these Orgran Corn Crisps with Viana Red Pepper Sunflower Veggie Spread and topped it with sprouts and Cherry Tomatoes!  They were AWESOME.  I have to say this is one of my NEW FAVORITE PRODUCTS!  It's so tasty, so creamy, so filling, it's great!  The flavor of the spread reminds me of Erie's Whole Foods Co-Op Deli Cashew Cheese!  No matter how hard I try I can't duplicate it!  But it also reminds me of the flavor of Garlic Bread dipped in Marinara!  It's FABULOUS!  I can't get enough of it and I will be ordering it again!  I also bought the Wild Herb one...I haven't tried it yet but if it's ANYTHING like the Red Pepper one I know I will LOVE IT!  I purchased them BOTH on VeganEssentials Website!  I have so many reviews, products, and tidbits to share with you I am getting behind so I have been considering pumping up to at least two blog posts per day!  At least that is my hope for a while!

MONTHS ago I (finally) watched the Forks Over Knives Documentary and I would recommend it to ANYONE and EVERYONE!  Last night I finally watched the Extended Interviews part which is above and beyond the documentary itself.  This is a photo that I took from my iPhone off my TV - not bad, eh?  It's a photo of T. Colin Campbell.  I have linked the wiki page if you are interested in reading more about him and his career - but in short - he is one of the brains behind Forks Over Knives as well as The China Study and many more enlightening projects!  He is an amazingly fascinating man who is compassionate and very knowledgeable!  Other people who are amazing to read up on and follow while talking about Forks Over Knives are Caldwell Esselstyn, Neal Barnard, and John McDougall - among others!  ALL Doctors and Professionals in their fields!  And people I have researched time and time again!  For those of you who have Netflix - you can watch BOTH the documentary AND the Extended Interviews for free with your subscription.  I believe there are like-documentaries on Hulu Plus as well!  They are definitely worth the watch!  They WILL BE and ARE an eye opener for everyone regardless of diet/food preferences!

That's my first installment for today!   Let me know if you have heard about "Hair in Teeth" in dogs, if you have tried any of the products I mentioned above, or if you have seen Forks Over Knives and your take on it.  And if you haven't - but know these health leaders - I would love to hear what positive things you have to say about them, their findings, and their teachings and/or lifestyles and how it's helped you!