Happy Monday!  I hope you all had a nice Easter!  A Nice Weekend!  I really hope SPRING is coming soon!  In my last post I told you I had some surprises!  Well, I wanted to post them on Thursday or Friday of last week but life got in the way!  So...today I have LOTS and LOTS to share! 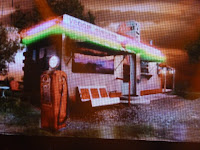 I went to the Carrie Underwood Concert in Buffalo, NY last week!  My Mother, Father, and I met up with my mom's brother - My Uncle Bob and the four of us went!  It was REALLY fun!  The main reason I wanted to go was to spend to spend some time with my parents - even if it was just a day!  My Father absolutely LOVES Carrie Underwood!  I can't say I am her biggest fan but I thought she put on an AWESOME show!  The concert was at the First Niagara Center where the Buffalo Sabres play!  Many of you know I LOVE Hockey!  Plus, she's married to a Hockey Player so that is cool!  And even COOLER - she's a vegetarian!  I believe she even made the move to vegan!  I notice the little things like one of her back drops was of a 'burger joint' but it said VEGGIE BURGERS instead of HAMBURGERS. 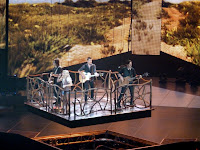 Hunter Hayes opened for her and he was great, too! 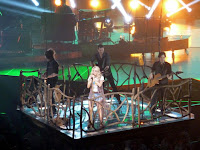 The stage show was awesome!  As you can see in these few photos they did an acoustic set on a mini floating stage!  It traveled about 75% of the Arena's Length or so.

She had about 4 or 5 Wardrobe Changes throughout the concert but there was NO down time!  I was pretty impressed with the ZOOM on my camera!  We were all the way on the other end of the Arena in a box! 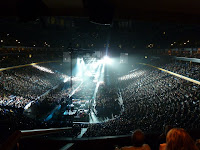 Here's a shot from our seats!  I've never seen that many people in this place before!  It was really neat!  There were movable screens that showed video and different animated back drops thru out the show - they also moved side to side and back and forth and in and out as well! 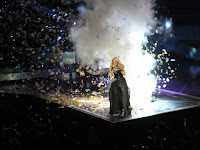 It was especially nifty when they showed the tornado from her latest video - it was like the twister was coming at you!

Then the Tornado 'disappeared' and the re-appeared and came up thru the floor behind Carrie while she was singing!  It was a nice time and very memorable! 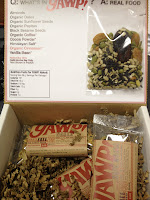 I have found some more products that I will be sharing with you in the coming weeks!  Here is a photo of one of them!  I haven't tried it yet as I went 'easy' on my teeth and gums last week.  Apparently my wisdom teeth wanted to shift on me and cause a problem.

Knock on wood...I think I have it under control...for now...it TRIED to get infected but I fought it with salt water, lemon juice, garlic, etc...not necessarily in that order or together! HAHA! 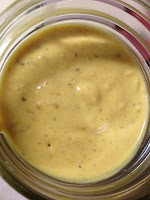 Thursday Night I made some Peanut Curry Dressing that turned out pretty good!


I was happy with the amount of Dressing this made!  It made a little more than a small (pint) Mason Jar! 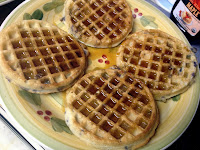 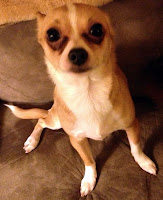 Another thing I tinkered with over the weekend was Wegman's Vegan Gluten Free Waffles!  They were the Blueberry Flavor and they were DANDY!  I also tried for the first time - The Wholesome Sweeteners Maple Agave Syrup - I will be doing a full review on that soon but first impressions on the product were positive that is for sure!


Paco had a 'good weekend'.  He had some great play time but also had some nice relaxing time, too! 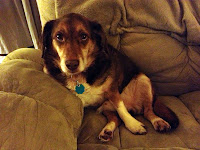 One scary thing that happened with the kids over the weekend was with Riley!

You know how when dogs yawn they curl their tongue?  Well, Riley did that last night and I looked over and saw 'grey' under his tongue.  Riley is a BIG baby and scared-E-cat so he doesn't let me really look at his teeth (or trim his nails or give him meds or even let me brush him!)  At first I thought it was a HUGE thing of plaque so I called the vet first thing this morning.  We have an appointment tomorrow morning!  They think that much plaque is in a really weird place and asked me if it was a tumor.  I told them I honestly couldn't tell!  He wouldn't let me see it good enough.  So now I am worried about that - so PLEASE - keep him in your thoughts that it is teeth and I can just get them cleaned and nothing more. 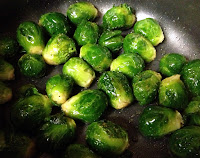 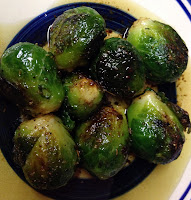 I know I shouldn't follow that story up with FOOD but I am going to!

Last night I wanted some Simple Foods.  So I did just that!  I did Brussel Sprouts in a little bit of Garlic Grapeseed Oil and sprinkled in some Wildtree California Garlic Pepper.  They were AWESOME!  So simple...so easy...so tender...so flavorful!

As you can see I got some new plates!  Woot!  Yes!  I found some really awesome deals this weekend!  I found these plates at the Dollar Tree!  I ended up getting 5 different ones!  I also got 5 bowls that matched the individual plates - mostly for blogging and picture taking purposes so you don't have to look at the same 2 or 3 plates I have been posting!  Another great deal I found was a set of 15 (or 17) Paula Deen Pots/Pans, etc.  AND...I found a $400 Dyson Vacuum Cleaner at Sam's Club for just $149.  YEAH!!!

I have lots more to post but this entry is probably pretty long as it is so I will save some for tomorrow and the next day!  Thanks for stopping by!  Can you relate to anything from this post?  Let me know about it in comments!  Thanks!