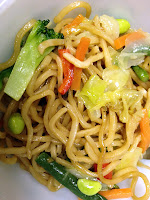 I left the last couple of days without a new post so I have a lot to catch up on today!  I have been cheating with some convenience foods lately but have been trying my best to increase the nutritional value of the foods even if they are convenience foods.  For example...I found store-bought vegetarian Stir Fry.  It was oddly low in sodium for a stirfry as well as a store bought item it was gently flavored but lacked a good a mount of veggies.  So I added a little bit of Coconut Aminos (which I will be doing a review for soon!) and added a few more veggies to it!  It turned out pretty well!  The 3 reasons I am posting about these couple of 'convenience' foods is ONE - the produce - for the most part - in my area is LACKING.  I can find it but the quality is not very good.  TWO - time!  I hate to use that as an excuse but between the ice storms, our work schedule, and medical issues between my husband and now my father - it's been a little crazy lately!  THREE - I have been starting to coupon a little bit - nothing extreme - but - the coupons I have been finding are for things I enjoy and/or haven't tried before and am getting good deals on them - PLUS - my VitaCost and VeganEssentials orders came in over the past week! 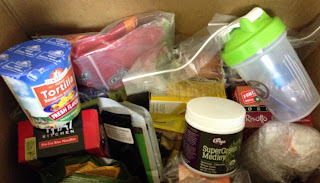 Speaking of VitaCost...here is a photo of my order!  I removed some of the packaging, tho.  There are some other items in there that were not necessarily part of my order but I received in the mail and will be blogging about them soon!  I'm VERY excited about it! I ended up getting $10 off my VitaCost Order AND got FREE SHIPPING!  As far as the coupons go - I saves $21 this past weekend and the weekend before saved about $20.  I wasn't able to find everything I had coupons for either and I need to use them before the end of the month!

One of the MANY things I got in my VitaCost Shipping was a different new-to-me kind of Kale Chips!  They were tasty but the crumbed quite a bit.  The flavor was Sweet Mustard.  I am going to do this flavor at home myself once I find some good Kale! 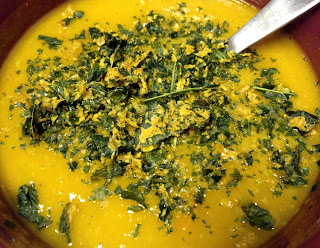 Speaking of crumbled Kale Chips...here is what I did with them!  I got Pacific Foods Cashew Carrot Ginger Soup for a good price so I had this for lunch yesterday.  I sprinkled a generous amount of Kale Chips/Crumbs on top!  I LOVE these two colors together!  It added nicely to the overall flavor, too!  Actually I ended up getting two Kale Chips, now that I think of it!  The ones I used on the soup were from Rhythm SuperFoods and were Zesty Nacho Flavored!

Just another convenience food with a little more added nutrition!

I need to use an open bag of Daiya "Cheese" so one evening over the weekend I made these snack bagels.  I know that Daiya Cheese does contain added oils but I had not been using as much Grapeseed Oil in the foods I have been making the past week or so.  I wanted to increase this comfort and convenience food with a bit more nutritional value so I squirted a little bit of FoodsAlive Flax Oil SuperDressings on it - you can see the little bit of orange color under the 'cheese'.  They were really tasty!  I have to admit!

I asked my husband to pick this week's country for my Foods Around The World.  He picked Mexico!  I LOVES it when I make Tacos!  He's not a vegetarian - far from it - so he had his and I had mine!  This is a photo of mine!  I had Organic No Fat Vegetarian Refried Beans, a small amount of Avocado, Lettuce, Tomato, Onion, a very little bit of Daiya Cheese, and a little bit of Hot Sauce. 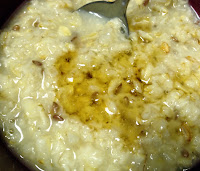 For Breakfast I had this Mom's Best Organic Cinnamon Plum Oatmeal.  I just added water and a small teaspoon size packet of Wholesome Sweeteners Blue Agave.  I plan on doing some reviews for these products down the road, too!

Speaking of Cinnamon...recently I tried the Apple Cinnamon Bar from Raw Revolution.  It was fantastic!

At first bite it was like eating dehydrated Apple Chips and Cinnamon!  Then the textures came in to play!  The powders and seeds contribute to the texture as well as the hardiness and chewiness!  Both the flavor and the texture were satisfying!  As I continued to munch on this bar of delight it continued to be sweet - super sweet - but in a good way!  Apple, Cinnamon, Seeds, and Grainy-goodness from the powders - all played a part!

Here is what's inside of it!