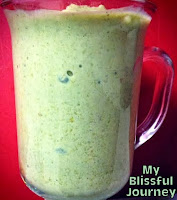 I felt some sniffles coming on and decided to try and fight anything potential OFF and tried the following recipe in a smoothie and was overjoyed with the flavor!  It was really tasty!

I will be doing a few more flavor combos using the Emergen-C Booster in them soon!  Stay Tuned!

I've posted about this Garden of Life Product before...but today I think I will post more info about Yerba Mate as a whole!

Yerba Mate is well known as the source of the beverage called mate, Chimarrão, Tererê (or Tereré) and other variations, traditionally consumed in subtropical South America, particularly northeastern Argentina, Bolivia, southern Brazil, Uruguay and Paraguay.[1] It was first used and cultivated by the Guaraní people, and also in some Tupí communities in southern Brazil, prior to the European colonization. It was scientifically classified by the Swiss botanist Moses Bertoni, who settled in Paraguay in 1895.


This tidbit is on the Wiki Page for the herb.  For more info on Mate as a beverage they have a dedicated page for that as well. The page goes into more of the hot beverages and traditional beverages.  I have consumed it as a tea or tisane before and you can read more about that over at Sororitea Sisters - our tea site.  This Smoothie was cold.  I was VERY pleased with the flavor and will certainly try it again in the future!
Posted by Unknown at 5:59 AM