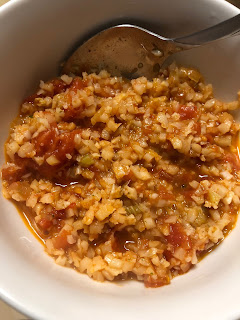 The days seem to be getting away from me!  I have been meaning to blog about a dish I made from the Thug Kitchen 101 Cookbook but I lost the photo!  That is mostly due to the fact that I FINALLY got a new phone!  I've been watching mine die and slow and painful death for at least a year now.  I'm stubborn.  That's my problem.  But anyways...

I did take this pic on my new phone last night!  I'm already like the camera on my new phone a whole lot better!  This dish was FAB by the way!  I used frozen diced cauliflower and then threw in those frozen cubes of garlic, onion, and cilantro.  I also used a can of diced tomatoes!  I will be doing this dish more and soon!  I LOVED it!  Oh!  I also added smoked paprika, cumin, and nutritional yeast!  YUM! 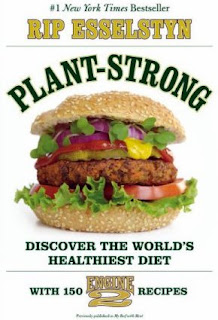 For Valentine's Day hubby asked me what I wanted.  I told him flowers die in 3 days and I would enjoy vegan cookbooks WAY MORE!  So he did just that...he gave me the nod to go on a vegan cookbook shopping spree of sorts.

I just received this one in the mail today.  I will surely update you in the next couple of weeks the other books I got, too!

I ordered them off of Jet because I have found them to be lower in price most of the time.

I've been a fan of Rip Esselstyn and other members of his family for a while now and thought I would finally add this book to my collection!  What are some of the books on your wishlist lately?
Posted by Jennifer at 8:03 AM