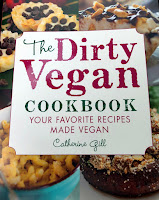 Let the next round of Vegan Cookbook Chatter BEGIN!  I know I posted on last week but I received the rest of them in the mail today and I hope to spread them out over the next week or two along with some other FUN stuff!

The Dirty Vegan is one of 8 more on my list to share with you!  Just by thumbing thru it I saw a lot of Vegan Comfort Foods and what I would call 'cheater' recipes that might use store bought vegan items within another recipe but this book also has some really great from-scratch solutions that are quick and easy if you don't want to buy the storebought version of some ingredients! 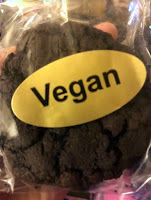 Here is the other mini-pack of cookies I grabbed while at Mustard Seed Market over the weekend.  They were SO VERY RICH I could only eat one at a time.  This pack had 2 cookies - whereas the Thumb Prints had 3 cookies.  These were Chocolate Cookies with Chocolate Chips in them.

Both cookie options were pretty tasty!  Especially for someone who doesn't eat a lot of sweets.  It was a nice few-and-far-between or once-in-a-blue-moon type of treat.

This is another past-find I had yet to blog about!  I found it at Wegmans a while back and it's vegan Blue Cheese!  It was pretty yummy!  I, personally, would LOVE to find a chunky Blue Cheese but this is good in the meantime.  I do like the texture of Daiya's a bit more than this one but the price was more impressive on this one for the size difference.

This is quite versatile and I really hope I can find some of the other flavors I have seen online of WayFare's Vegan Cheeses!  Have you tried any of them yet?  If so - what did you think!?

For about a year - I have received the Bird of the Week from the Audubon Society.  It has become a weekly 'thing' with DH and I an now my dad's in on it!  When I get the bird of the week I forward it to them!

This was last week's Bird of the Week!  Isn't the Pink-Headed Warbler AWESOME?

Last night when I finally sat down and started relaxing (after a failed Carrot Soup attempt) I looked over and saw Cricket jump up and sit right next to Paco.  They were cheek-to-cheek and I don't mean their faces! LOL!

I have to pick Paco up every time he wants on the sofa and Cricket usually don't get THIS close to him - but I'm glad he did!
Posted by Jennifer at 11:38 AM