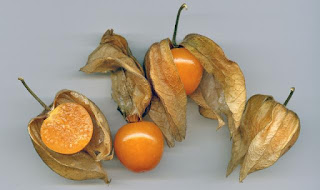 A friend/co-worker of mine brought in some Husk Tomatoes not too long ago and shared them with us.  They were pretty yummy!  Her father grew some of them this year!  Here's a stock photo of them.  They were almost like a berry (some people say they are like a Gooseberry) but they also had a hint of cantaloupe/cucumber likeness to them, too, on top of the sweet tomato, that is.

I've been having fun with the decorated rocks I have been telling you about lately.  I have been finding a lot of them as well as making some of my own.  Here are 5 that I decorated last week.  I've had some luck with Sharpies.  I took a few of them to a State Park over the weekend.  I forgot to take photos but will be blogging about it at some point.  It was a very nice fall weekend at a historic place that is for sure.  My parents and I took our Wildtree stuff and sold quiet a bit of it.  We were supposed to do the Busti Apple Festival this Sunday but I'm not sure if we have enough stock.  At the end of this year we will be ending our Wildtree run.  It's been a great 9 years but the company is making a lot of changes that aren't really what our area focuses on, unfortunately. 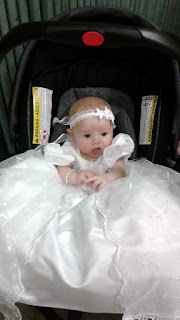 About a month ago my niece had her Christening.  My sisters' husband/family is Catholic.  My sister and I were raised in a Pentecostal Church (altho my parents were not Pentecostal - but that's a story for another day).  After we moved to PA my sister stopped going to church.  I continued and was even in IVCF while in college.  IV or IVCF is Inter Varsity Christian Fellowship.  It was open to everyone.

These days - I know what I believe and have strong beliefs but do not attend church regularly.  I will attend different churches for different reasons such as volunteering or to see a speaker or attend a celebration, occasion, etc.  I respect all other religions and feel my personal beliefs don't really match to any said place of worship.  I also think that it's a very personal choice - and eventho I appreciate hearing what other people believe - I don't want someone telling me what TO believe or telling me what I believe is wrong.


Plus with the way politics have been the last several years that has been a real tough one for me too.  It seems politics have entered the church and many churches are more political than about the fellowship and togetherness and equality.  I rather hang on to the values I grew up on in the church that I remember and take them on my journey from here on out.  To treat everyone equal, to be compassionate, help others when I can, and try and make the world a better place.

I'm sorry if that sounds like I'm against church - that couldn't be further from the truth - it's some of the people that confuse me - not the ideas and beliefs.  My thoughts and feelings on the subject are very complex and many don't understand them but I'm ok with that.  I feel it's what's on the INSIDE that counts.  My purpose is not to judge people - nor is it anyone's job to judge people - and I think that many have forgotten or disregarded that simple way of thinking.

Sorry for the rant here - my real purpose - was to post a photo of my sweet niece - but wanted to explain why she was in a dress 6 times the size of her.  Regardless - she is adorable and wonderful! 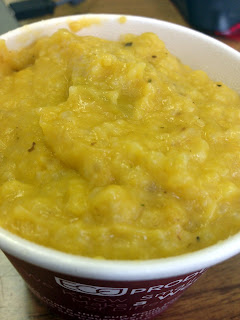 A while back I was telling you about a new place in town that was VERY vegan friendly.  It's called Total Evolution.  This week they started featuring soups.  3 of them - that they made themselves.  2 are vegan and the other one is meat and dairy free but contains honey.

I enjoyed both of them.  This first one is Butternut Squash and Rice and the other one below is Purple Potato and Leek.

This morning I had one of their Wild Cherry Cranberry Smoothies.  It was lovely.

They have a new and seasonal smoothie for the Halloween Season called the Frankie that I am going to have to try before too long. 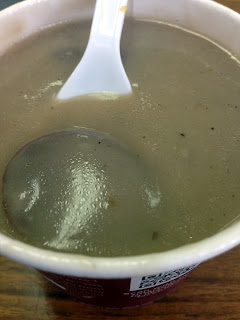 I really need to get to a few local produce stands before the winter gets here.  I dread the winter months not only because of the snow and cold but because the produce is narrowed down to store bought which is usually drab and dreary.

And speaking of weather - I hope everyone is ok with all of the hurricanes and earthquakes that have been striking!  YIKES!  Please let me know in comments!  I want to hear from you!

I already have one more post on deck - hopefully I will be posting it tomorrow - it's something new-to-me that I have been eating that I am totally addicted to now.

I also have a few other grocery store finds I need to share with you so stay tuned!
Posted by Jennifer at 9:46 AM