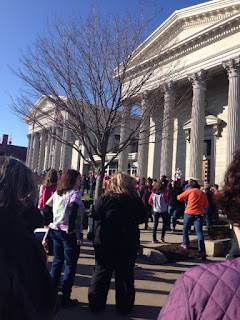 I try to shy away from politics on this blog eventho I have many thoughts and feelings about any and every topic.  That's NOT what this post is about.

This post is about me attending the Women's March on Saturday in Erie, PA, where they predicted 300 participants and ended up with somewhere between 2,500 and 4,000.

I'm NOT going to go into the reasons WHY I attended but rather how interesting the event was, how wonderful the weather was, and how lovely it was to see UNITY.  Yes...UNITY.  Many media outlets have their way of swaying their stories one way or another and that's NOT what this was.  There were people from all walks of life that attend with all different views and focuses and all I felt while there was LOVE. 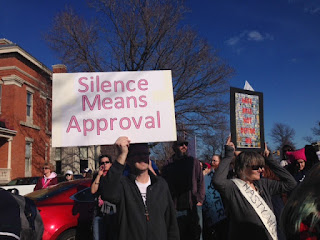 If you agree or disagree with what you THINK the Women's March was for or about - one thing everyone can agree on it that it was HISTORIC.

I'm not going to say much more about the March that hasn't already been said.  And I know there are people who are excited about it and others still and always will question it...and that's ok. 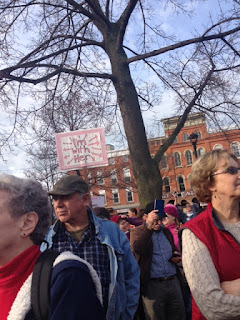 I'm simply going to show you some photos of the one I went to.  If you would like to see LOTS of photos from around the world - THIS - is an EXCELLENT showing of many of them.

I will say that I didn't have plans to attend at first.  Once my plans changed for the day I started thinking about it but still didn't make up my mind FULLY until about 20 mins before we actually left.

I caught a ride with a friend of mine who you will see later.

I'm a people-watcher and I will say there was a LOT to see that day.  Much of which will remain in my mind for my entire life. 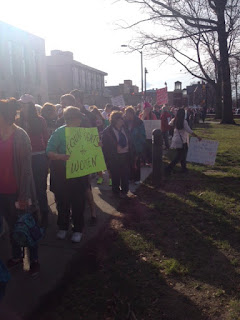 Once we congregated in the middle of Perry Square there were many speakers...a veteran, an educational professional, a small business owner, an immigrant, and a woman who was a minister/preacher (altho I'm not sure of which church - but it really doesn't matter).  What matters is that we were all respectful of each other.

I really don't think it could have been a BETTER day! 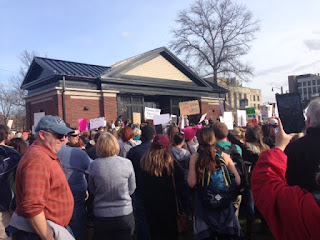 There were a lot of smiles, a lot of hugs, and the vibes were very positive.

Those with disabilities participated, cancer survivors and others who have survived diseases and illnesses were represented, those who were walking in support of someone else were there, and voters of all types showed up!  There were NO conflicts.  There was very little police presence.  I actually only saw one uniform. 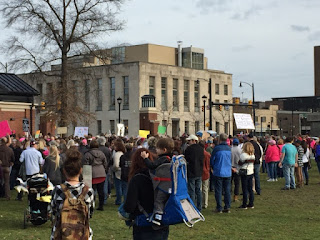 However there are and always will be people who will try and rain on it.  It's ok.  It's what democracy looks like!

Here are some more photos of the event. 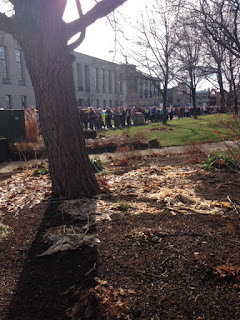 With this photo we were about half way to the finish point.  It was a very short march/walk but it seemed to take forever.  We were somewhere in between the front and the middle of the first half of the line.  When we got to the finish point there appeared to be people who still had yet to leave the court house.

The temperature was in the upper 50s and one building in the direct sun even said that it was 63 degrees which is unheard of for January in the snow belt. 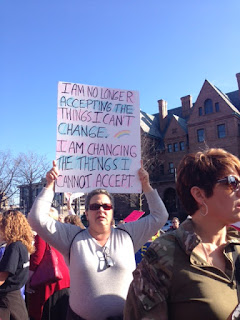 Sure there were signs that were more comical or snarky than others but what was really wonderful were the ones that were smart, positive, and powerful.

I have many more photos but wanted to post just a few.  A few of them that went in line with My Blissful Journey...ones that were more positive and powerful. 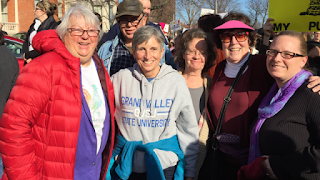 Here are 6 of us at the beginning of the march.  We ended up seeing a few other people from our area.  I know of others that attended DC, Pittsburgh, Portland, and one in California all from our region.

I'm glad I participated and I will always have my own memories of that day and how it differed from what the media has told.
Posted by Jennifer at 8:47 AM