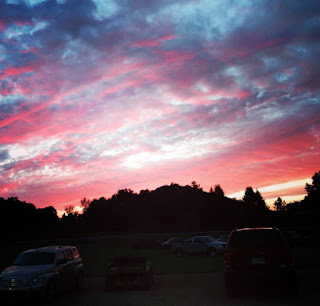 I have at least 4 posts I will be doing from the Warren County Fair Week but I thought I would ease into it with a few 'behind the scenes' type photos to start.

This was taken Sunday Evening as I was just getting back from WNY VegFest.  The sky was so beautiful!  I couldn't resist taking a photo of it.

I tried to get to sleep early that night because we had to get up around 3:30am to prepare for the Morning Show.  We did double air shifts Monday thru Friday that week!  Then all of the other festivities that went along with being a volunteer and board duties my hubby had that week, too! 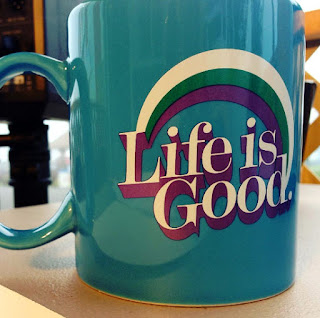 We can't help but think of a friend of ours during fair time (and every day we are at work for that matter).
He's been gone for a few years now...I actually can't believe it's been that long!  He will always be missed!

This was his saying!  A friend of ours found this mug and gave it to Dale the first day of Fair.  He got pretty choked up about it.

We talked about our friend and co-worker often that week.  It would have also been his birthday, too!

Cancer is an awful thing. 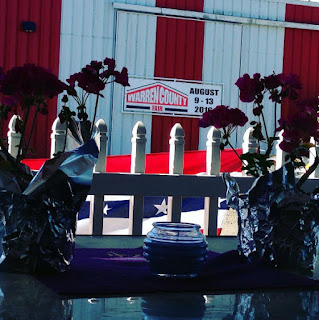 This year we installed a park model that was found for a wonderful price.  It's in the backstage area for the entertainment who visit our fair.

This was a photo taken from the deck.  Many people worked on the space throughout the summer to make it look nice.

We had some wonderful feedback about it too!

I will probably have more photos of this space down the road.

This was my view from Monday after the Media Lunch was over.