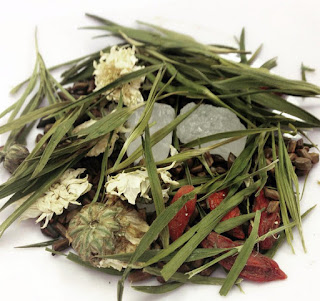 Just a quick post regarding herbs and home stuff.  I posted another lengthier post earlier today if you would like to check that out by scrolling down as well.

Check out this herbal tea (tisane)!  It's from a company called Cha Tale in the UK.  They have some of the best tasting herbal teas I have had so far and I drink a lot of tea!  I'm not usually that fond of herbal teas.  Mostly because when I drink tea I want to drink tea and have it TASTE like tea!  Most herbals aren't that tea-like.  Another reason I wanted to post this herbal tisane is because of the Cassia Seeds you see on the bottom.  They have a TON of health benefits including those for eye health and I have been focusing on eyes lately! 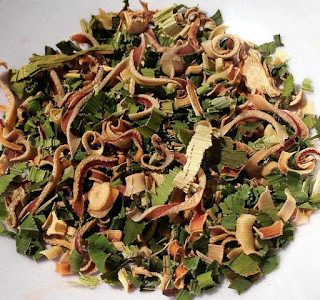 This next one is a combo of Pandan Leaves and Lemongrass.  NOT by the company I mentioned above but I still wanted to blog about it because of all the benefits of Pandan Leaves more specifically regarding pain relief.  I have an upcoming article and recipe for this tea over at The Raw Food World NEWS Site so be on the look out.

This past week hubby confirmed that the kidney stones he has gotten time and time again are directly linked to his Crohn's.  After tests it was found that they were made up of calcium and sodium.  It's not so much that he consumes those two things much it's that because of his Crohn's those two things don't break down like they should.  So now he's focusing on lower calcium and lower sodium foods, however, he is a meat eater, and because of his Crohn's can't eat many raw fruits and veggies or even some of his cooked veggies he used to call favorites.  If you are new to my blog - it's true - our house hold is a mixed diet household.  This is becoming more and more common these days.  On top of everything else he has to make sure that he's eating low fiber foods, too.  A few random things we have found that meet all of those rules are spaghetti, rice crispies, and apple sauce.  I will do occasional posts with additional findings.
Posted by Jennifer at 1:18 PM