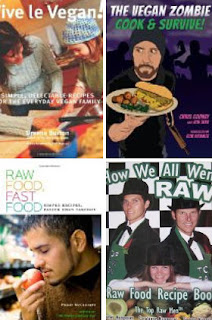 Okay...this is going to be a pretty crazy post.  Vegan and Raw Vegan Cookbooks are just like better than potato chips...you can't have just one!  Therefore I will be doing a post featuring several of my favorites!  But please keep in mind there are MANY MORE and you can view them on my GoodReads Feed and Profile.  If you are on GoodReads PLEASE add me!  I'm looking for more veg friends on there!!!!  So...here goes!  4 books you may or may not have guessed I adore!  Vive Le Vegan by Dreena Burton I have LOVED since it came out!  It contains one of my most favorite recipes of all time in it which is the Hummus Quinoa Casserole!  Another one I would guard with my life is The Vegan Zombie Cookbook!  I met these guys more than once and they are AWESOME and so are their recipes!  I also like pretty much anything Philip McCluskey comes out with.  The possible 'dark horse' of the bunch may very well be "How We All Went Raw."  It's more like a binder but the recipes and ideas are pretty awesome.  Perfect example of 'don't judge a book by its cover.' 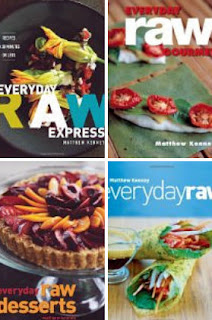 Above I mentioned Dreena Burton.  I pretty much like every book I have seen her come out with - like I stated about Philip McCluskey, too!  A few other Cookbook Gurus I can't get enough of are Matthew Kenney and Ani Phyo.  They are both wonderful!

Other Cookbook Authors I enjoy and wish I had more from include: Zsu Dever, Judita Wignall, Mimi Kirk, Jennifer Cornbleet, Robin Robertson, Terry Hope Romero, Tal Ronnen, and Bryant Terry.  I know there are many more but that is just off the top of my head.  I do have some of the books that some of these people have done but have noticed even more books that they are behind that I either don't have and WANT or haven't gotten my hands on as of yet OR didn't even know existed!

I LOVE how the vegan and raw vegan cookbook world is exploding! 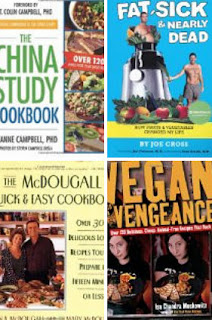 But who could forget some of the best of all time...some of the ones that have really taken the vegan world and mainstream world and media by storm?  Like The China Study, Fat, Sick, and Nearly Dead, Engine 2 Diet, and Forks Over Knives and their companion cookbooks!?  I MUST mention them!  And many of other doctors books like Dr. Neal Barnard and Dr. John McDougall.

And a WHOLE COLLECTIVE of books from Moosewood...which go back decades!

Now there are more celebrities who are throwing this vegan hat in the ring such as Alicia Silverstone and Mayim Bialik and I admire what they are both doing quite a bit!

There are just too many vegan cookbooks and so little time.  Tell me which ones you like, want, or wonder about!
Posted by Jennifer at 2:30 AM